The Most Inhospitable Place on Earth!

We’re in Ethiopia for the third time exploring some new destinations. Ever since our second visit in 2011 I’ve wanted to return to venture into the Danakil Depression, one of the harshest places on Earth. To get to this remote area along the border with Eritrea, we drove from Axum where we picked up a new guide, Rufael, and on toward Gheralta.

Along the way, we passed the town of Adwa and the surrounding mountains wherein 1896 there was a great battle between the Ethiopians and Italian armed forces. The Ethiopians were victorious and along with Liberia are the only two African countries never to have been colonized by European powers.


Then it was on to the ruins of Yeha, a pre-Axumite settlement and famous for its huge, remarkable, and well preserved 12-meter high stone temple that is thought to be over 2,500 years old!

Next door was a small museum with a lot of interesting artifacts including stone tablets with ancient text and books written in Ge’ez, the ancient liturgical language of the Ethiopian Orthodox Church.

We arrived at the Gheralta Lodge in the afternoon and set out to explore the grounds. We weren’t expecting to see any mammals but we found a colony of Rock Hyraxes living in some nearby cliffs. Surprisingly, hyraxes are the species most closely related to the elephant.


The next day we continued our journey to the Danakil Depression stopping to visit a couple rock-hewn churches along the way. The first was Abuna Abraham (also known as Debre Tsion). The climb of 850-feet ended up taking about 50 minutes. There were some steep sections but nothing challenging. As we approached the top some of the local villagers were on their way down having just attended a 2-hour mass!

When we arrived we had to take our boots off to enter. This church is semi-monolithic in that it was carved from the bottom up in the 14th century by cleric Abuna Abraham. The church contained murals, carvings, and impressive stone pillars. A lot of the paintings have been damaged by rain and the village had now put a cement cap on the church to keep the water out.


A tunnel or ambulatory had been carved around the back of all three chambers of the church. We could peek into the holiest chamber where there is a replica of the Ark of the Covenant. At the end of the tunnel was a small circular room called the Abraham Oratory where Abuna Abraham meditated.


The second church we visited was Abraham we Atsbeha. This church is easily accessible by vehicle and a short walk up some stone steps. We entered the church through a chanting room with two large drums on the floor and brightly colored murals adorned the walls.


We stepped from the chanting room into the rock-hewn sanctuary. According to local tradition, this church was chiseled out of the mountainside between 335 AD and 340 AD by King Abreha and his twin-brother and co-regent King Atsbeha. It has a massive cruciform interior, perhaps the largest of the region’s rock-cut churches, and an elaborately carved roof supported by thick pillars and decorated arches.


After a morning of cultural immersion, it was time to continue our journey down into the Danakil Depression. We knew we were getting close when we encountered a camel caravan on the way to the depression to pick up salt. It would take this caravan days to reach the salt lake while we could reach it in air-conditioned comfort in a matter of hours.

Along our route were bizarre trees reminiscent of Joshua Trees that grow in the southwestern US. Here they are endangered Dragon Trees (Dracaena ombet).


We had now entered the Afar Region. The people here were used to live a nomadic lifestyle but are now encouraged to inhabit more permanent settlements.  We stopped at the village of Hamedela to pick up our police escort. It was a grim place with a lot of crudely constructed huts and trash. The Danakil is one of the most inhospitable places on the planet where temperatures soar to 122 degrees Fahrenheit and it rarely rains. If it wasn’t for salt mining and now tourism, it would be nearly impossible to make a living.


Here the paved road ended and we entered an immense salt flat to watch the sunset. By now many jeeps of tourists had congregated and we waded out into the briny water to avoid getting people in our photos. The sun set quickly behind some clouds casting reflections onto the surface of the shallow lake.


Leaving the salt lake, we encountered another camel caravan ladened with salt. It made for a surreal photo in the glow of the jeep's headlights.

We drove past Hamedela to the main road and headed back the way we had come. Just before a bridge we left the main road and followed a dirt track to a palm oasis where amazingly water was flowing! At one time an Afar village was here but now it had been converted to a tourist camp. By now it was dark but our dinner table was set and charpoy beds were available to sleep under the stars.

Early the next morning we set off to discover why travelers would come to such a harsh place.  One of the main reasons was to see the otherworldly Dallol Hot Springs. The springs are located inside the crater of Dallol Volcano, at 48 meters it's the lowest land volcano on Earth. Dipping a finger in the scalding hot pools more acidic than battery acid isn’t advised!

The magma below heats up groundwater forcing it to the surface where it dissolves salt, sulfur, potash, and other minerals. As the water evaporates, it leaves a crust that covers Dallol's crater in a mind-blowing array of neon colors!


A short distance away were “salt mountains” with formations resembling pillars, skyscrapers, and a skeleton’s hand.


After lunch, we drove to Abella, a fast-growing Afar town. I was expecting to camp but we were pleasantly surprised by staying in a nice guesthouse with a friendly family. We sat on the back veranda watching the eldest daughter perform an Ethiopian coffee ceremony in the late afternoon.

The following day was a big one. We were finally going to climb Erta Ale Volcano, the other main draw to the Danakil Depression. Ever since our last visit in 2011, I’ve been wanting to return to Ethiopia to climb Erta Ale to see its impressive lava lake but it wasn’t until this year we were able to make the trip. Rufael explained that even though Erta Ale wasn’t that far from Dallol, there was no direct way to get there so we had to drive around. All of this is changing with a new road being built by the Chinese. We left the main road and followed a dirt track toward the volcano. Rufael saw a gazelle lying under a bush to escape the midday heat. Sure enough, when I looked in my bins, it was a gazelle but which one? We settled on Soemmerring’s but we later identified it as Dorcas Gazelle, a new species for us!

The track led to what seemed to be an abandoned village, then men and boys came pouring out of the concrete buildings.  It was here that we would pick up our police escort for the volcano hike.  Rufael suggested we stay in the vehicle while he and Kasaye negotiated some last-minute details with the locals.  It took some time as there seemed to be some issues to resolve.  Kasaye drove us on a dirt track parallel to the new road being built by the Chinese and we stopped at one more checkpoint for another round of difficult negotiations with the locals. We arrived at the car park at Dodom in the late afternoon around 4:00 and set off for the volcano rim after a late lunch.

We hiked the newly constructed road toward the rim of Erta Ale. We were moving at a steady pace but Rufael who had stayed behind to supervise the loading of our pack camel managed to catch up to us. We followed the road veering off onto a trail to the rim. Here there were many stone huts with straw and plastic roofs constructed for the tourists.

We reached the rim and peered over. Bummer! The lava lake was gone! Just a dead lake of black hardened lava remained.

Rufael said we would have to climb down and cross this “ dead lava lake” to reach a lower rim. When we reached the edge we peered into a crater full of smoke and noxious gas. This was far worse than I expected. One of the most amazing natural phenomena on the planet was now gone. Why had we waited so long to visit? There were 3-4 small spots of lava visible but no more. The wind was whipping and I didn’t want to get too close to the unstable rim.

Another couple was returning and said the view was better a bit further along the rim. We found the largest spot of visible lava but it was a far cry from the classic view. We knew that an eruption in 2017 had created a crack causing the lava lake to drain but we had heard that the lake was starting to refill and that Erta Ale was still worth visiting. The gas was bad here so we retreated back along the rim and sat on a flat piece of lava hoping things would change, maybe the smoke would clear or maybe there would be a small eruption but nothing happened.


We decided to return to the upper rim where we would spend the night in one of the stone huts. Our two mattresses just fit in one of the tiny structures and we settled in for the night.  I slept off and on to the sound of the blowing wind. Our quest to see Erta Ale ended with bitter disappointment.


The next morning we returned to the car park and left the Danakil Depression for Semera. Although we were disappointed in not seeing the lava lake, we were happy to have finally made it to this alien realm, one of the most remote, hottest, lowest, and inhospitable places on Earth! 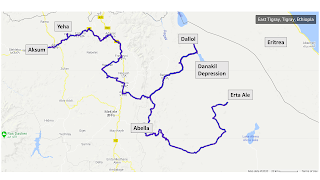