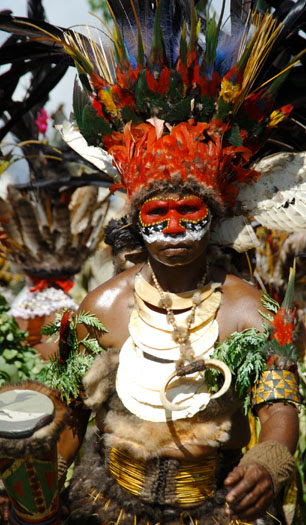 We visited Papua New Guinea during September of 2006, starting with an intense two days of the 50th Goroka Show. Singsing groups from over 100 clans performed in competition in cacaphony of sight and sound. We spent several days on the Sepik River and tributaries visiting several villages and their Spirit Houses. From there we went back into the Highlands to visit Huli Villages and see Birds of Paradise at Ambua. Later we flew to Ambullua to traverse and climb Mt Wilhelm, the highest peak in Papua New Guinea. We ended our stay with a couple days at Malolo Plantation near Madang before visiting the Atherton Tablelands in northern Australia for the final few days. We've posted a few photos at http://www.mfaucher.com
Posted by Marc & Peggy Faucher at 11:28 AM 1 comment: