You don't have to venture into the Everglades to see great bird life.  My brother Jim has a wealth of birds just outside his back door.  It doesn't hurt that he lives on a mangrove-lined canal just a hundred yards from the Intracoastal Waterway.  One of our favorite residents is Ozzie, the Osprey.  We now know that she is a female.  Female adult Ospreys have a pattern of brown feathers across the white chest. This is sometimes referred to as a "necklace." The male's chest is plain white. The female is often larger than the male. Other than those details, the male and female look alike. 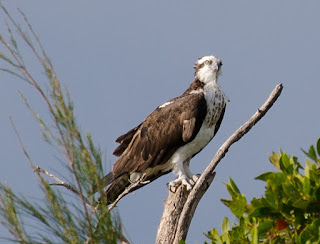 We decided to keep the name Ozzie although some wanted to change her name to Harriet.  She is an avid fisherwoman, catching big fish in her razor sharp talons and consuming them before our eyes. 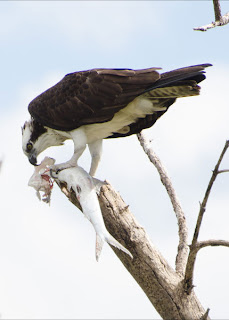 Another resident is a Little Blue Heron.  He patrols the sidewalks and gets grumpy if you approach too closely.  He flies off squawking his annoyance. 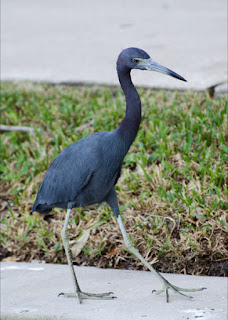 Hidden in the mangroves are other birds such as this Great Blue Heron and Anhinga. 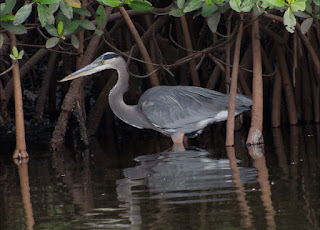 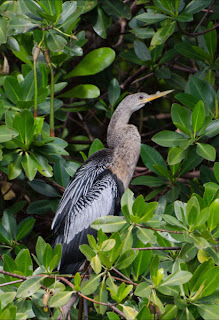 A tiny Lesser Yellowlegs was combing the rocks along the canal for a morsel to eat.  Sea Roaches frequent these rocks and would make a tasty meal for the Yellowlegs. 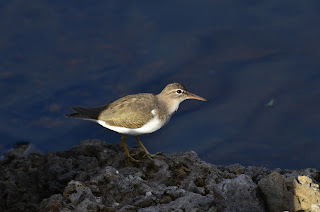 We visited a small pond on the property.  There was a large flock of Hooded Mergansers swimming on the pond.  The males were spectacular with bright white crests that they expand to impress the females.  The males looked quite formal in what resembled starched white shirts with black suspenders.  The females were not as flamboyant yet were elegant with cinnamon crests. 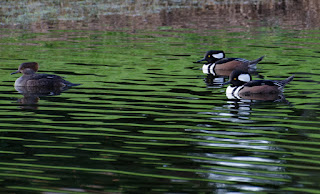 Who's that in Ozzie's tree?  A Red-shouldered Hawk landed on one of Ozzie's favorite perches.  Luckily she wasn't around at the time to chase the Hawk out of her territory.  Eventually he left on his own accord. 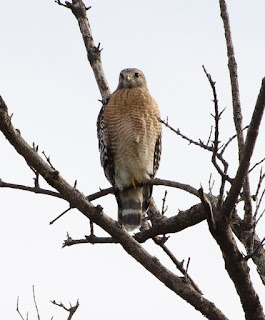 Whether in Florida or Vermont backyard birding is fun and educational.  The birds that share our yards are a joy to watch and are a connection to the natural world.  With just a little space to build nests and access to food and water, birds will feel safe and comfortable in your yard.  Time to go home and fill our birdfeeder.  I'm sure the Black-capped Chickadees, Nuthatches and Cardinals are hungry!