Greetings Everyone,
After seeing the Dugongs in Shark Bay it was time to drive back to the Perth area to prepare for our visit to Rottnest Island. We had a day to spare so decided to return to Yanchep National Park to search for the Rakali. This time we stayed right in the park so we could search before dawn. We walked along the shore of Loch McNess past the Wagardu Jetty to the far end. I noticed something swimming low in the water from the near shore to the reeds. It could only be a Rakali! Commonly known as water rats, a push was made in the 1990s to change to the aboriginal name Rakali to try to give this native rodent’s reputation a makeover. Unfortunately, it was before sunrise and Marc didn’t get a great photo.

On March 5 we took a ferry from Hilary’s Wharf to Rottnest Island just off the Western Australian coast from Perth. The island has become a major holiday destination but we visited mainly to see a Quokka, a small native marsupial. In fact, the island was given the name 't Eylandt 't Rottenest ("Rats' Nest Island") by Dutch captain Willem de Vlamingh who spent six days exploring the island in 1696, mistaking the quokkas for giant rats. Rottnest is undoubtedly the easiest place to see a Quokka although we had great luck in seeing them on the mainland. Here on Rottnest Island, they have become part of the tourist attraction where people flock to take a selfie with an adorable Quokka. There are commonly seen around the restaurants in Thomson Bay looking for a handout from tourists who feed them despite laws against it. As a result, the Quokkas around the homestead are unhealthy suffering from deficiencies and predisposed to disease and even death.

The next day we rode our bikes out to Cathedral Rocks to see Australian Sea Lions. The sea lions weren’t around but several male New Zealand Fur Seals were frolicking in the surf just below the viewpoint.

On the bike ride back to Thomson Bay we were able to see Quokkas in a more natural setting.

Upon our return to Perth, we had built in a few contingency days at the end of our itinerary and decided to return to Cheynes Beach to give the Honey Possums one last try. This time we solicited help from a local photographer, Raeline, to help us find the elusive Honey Possum. We made the five and a half hour drive to Cheynes Beach and arranged to meet Raeline that evening for a “Honey Possum Tutorial”. She showed us all her usual spots where Honey Possums are often found and indicated that they are best seen in the early mornings or late afternoons. We had been searching in the right areas on our first visit but were looking mostly after dark. This time of year the Honey Possums are seen feeding on the blossoms of Birds-nest Banksia (Banksia baxteri). Sadly we didn’t find a Honey Possum but we did encounter a Grey Butcherbird that had just killed a New Holland Honeyeater. It was in the process of storing its meal in the fork of a branch to be consumed later. Although considered gruesome by some it is an ingenious adaptation.

We were up before sunrise to survey the same route we did last night for Honey Possums. Using the information provided by Raeline we felt more positive. We were definitely looking in the right places at the right time but could we detect the drop-down motion that Raeline kept talking about? The answer was no. When Raeline caught up to us we still had yet to spot a Honey Possum nor had Raeline. Time was quickly running out. Once the sun is up and it gets too hot, the possums go to sleep. Lucky for us it was a cloudy day. Suddenly, Raeline quietly states “I’ve got one.” I got a brief glimpse and Marc missed it entirely. Bummer, had we come this close only to miss it after all? Raeline said “give it a minute” and sure enough, the Honey Possum reappeared. No wonder they were so difficult to find. Male honey possums weigh just 7 to 11 g (0.25 to 0.39 oz), and females weigh 8 to 16 g (0.28 to 0.56 oz); about half the weight of a mouse. Their body length ranges from 6.5 to 9 cm (2.6 to 3.5 in)! This time we both got good views and Marc was able to get a photo!

“Mission Honey Impossumable” (see earlier post with the same title) had become mission accomplished! What a wonderful way to end an incredible two-month journey in Western Australia. A big thanks goes to Raeline for finding us a Honey Possum! We look forward to our next visit to Western Australia. There’s still so much to see and do!

For the 108 bird species seen and photographed by Marc go to his list on iNaturalist: 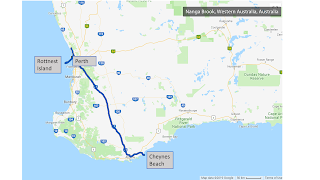 Posted by Marc & Peggy Faucher at 5:10 PM No comments:

We’ve driven 823 kilometers north from Perth to Shark Bay in the hopes of seeing a Dugong. We read that Shark Bay is one of the best places in the world to find these marine mammals resembling what many of us as know as a Manatee. We had booked a tour the following morning and set off early for the Monkey Mia Jetty. When we arrived, the Indo-Pacific Bottlenose Dolphins that frequent the bay were being fed by park staff and we went down to the beach to watch the show. Seven dolphins were eagerly waiting for fish. A woman gave a talk about the dolphins over a loudspeaker.

While watching the show, Marc got a call on his cellphone. Wildsights, the company conducting our dugong tour had just canceled because we were the only two signed up. Bummer, had we come all this way for nothing! We left the dolphin show and went to the gift shop to try and get on the other tour company’s (Perfect Nature Cruises) boat heading out at 10:30. Luckily they had space and I told Marc to go photograph the dolphins while I paid for the tickets. I returned to the show just as the volunteers were coming out to feed the dolphins. People are selected from the audience to feed them. I was chosen, even though I had pants on. I waded in to feed Puck, a female with a calf. I placed the fish in the water in front of her and she gently ate it.

Following the dolphin feeding, we went to the jetty to board a large catamaran, the Aristocrat 2, for our dugong cruise. The water was very choppy and murky. “How were we to see Dugongs in these conditions?” I wondered. One of the deckhands said that the water was dark to a recent algae bloom. Normally it would be a clear emerald green instead of an inky blue. Finally, our deckhand spotted a Dugong off the starboard side. I caught a quick glimpse as we motored past. “I hope that wasn’t it?” I thought. We did find another Dugong with a calf and this time I could make out her head and nostrils when she came to the surface to breathe.

She was up for a few seconds before diving with a flip of her fluke-like tail.

We encountered another cow with a calf, seeing 5-6 Dugongs in all. Shark Bay is home to more than 10,000 dugongs, about 10% of the world’s population of this vulnerable species. This was an excellent time to see Dugongs in Shark Bay as they come here in the summer to enjoy the warm shallow waters of the inner gulfs.

On the way back we encountered a large pod of dolphins and they joined us to ride our bow wake. They swam back and forth from one pontoon to the other, sometimes swimming upside down and other times porpoising through the water. It was great fun to watch.

On the drive back to Denham, we stopped to check out Francois Peron National Park. We could only drive as far as the Peron Homestead, a working sheep farm in the early 1900s, without a high clearance  4-wheel drive vehicle. On the way back we encountered a male Emu with 12 grown chicks! The males actually incubate the eggs and guard the chicks until they are up to 7 months old!

We returned to the Peron Homestead at dusk to look for Common Wallaroos or Euros as they are called locally and to stay after dark to look for nocturnal mammals. As the sun set, we heard some stomping in the bushes, so we knew the Euros were around but they were playing hard to get. After dark Marc spotted an animal in the beam of his headlamp. It turned out to be a rather sizeable feral cat, the first one we encountered on this trip. There were also European Rabbits hopping around, so just introduced animals and no native ones.

We were up before dawn to visit the Peron Homestead to see if we’d have better luck with the Euros. Once in the park, we were very fortunate to come across a Woma Python crossing the road. These snakes have become critically endangered in the Wheatbelt area.

When we arrived at the Peron Homestead we finally caught a Euro in the open and Marc was able to get a great photo.

Along the trail to the bird hide, I spotted a Short-beaked Echidna, the first seen since we were in Dryandra Woodland a month ago.


Since Wildsights canceled our Dugong tour yesterday, they booked us on today’s cruise. Fortunately, we had built a contingency day into our schedule and were able to go out again. When we arrived at Monkey Mia, both catamarans were moored. Would we go out today? A dingy motored out to our boat and it was brought to the jetty. We met Quinn our skipper and Toby our deckhand for the day's excursion on the "Shotover," once a racing catamaran in the ’70s.

Toby gave us a safety briefing and we were on our way. Quinn said it would be an hour before we reached the outer seagrass beds where the Dugongs had been feeding a few days earlier. We entered the “hot zone” and scanned the inky waters but there were no Dugongs in sight. Finally, Toby exclaimed, “Dugong! Dugong!”. Everyone crowded to the front of the boat to watch the Dugongs come to the surface to breathe. They came closer to the boat than the ones we saw yesterday.

Dugongs belong to the order Sirenia or sea cows. The name Sirenia comes from Greek mythology meaning mermaid. Historical accounts of mermaids, reported by mariners, may have been inspired by Dugongs or Manatees.

Mission accomplished! We saw Dugongs on not one but two excursions into Shark Bay. What a rare treat to see these mythical creatures in their natural habitat. It was now time to begin the long drive back to Perth.
We hope all is well with everyone.
Peggy and Marc 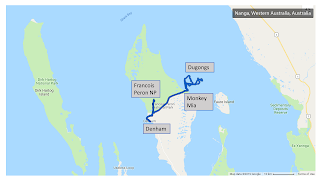