After our intrepid journey into the Danakil Depression, it was time to return to a less alien world. On our way to Semera, we passed a wrecked car on the side of the road and Kasaye came to a screeching halt. He said he had seen something under the vehicle. He backed up and lying under the car was what could only be an African Golden Wolf!

We were hoping to get a good sighting of this canine. Although the African Golden Wolf is widespread in the northern and north-eastern parts of Africa, we had yet to come across one on our travels. The species has only recently been recognized as morphologically and genetically distinct from the Eurasian Golden Jackal (Canis aureus). The wolf got up and plodded to the side of the road, giving us an even better view.

We reached the town of Afrera and visited its great salt lake to look for birds. The best find turned out to be an endangered Egyptian Vulture along the highway.

Sadly, it was time to say goodbye to Rufael as he was to return to Axum and we were to continue our drive to Semera. We encountered another roadside surprise, a troop of Hamadryas Baboons! It was another species I was hoping to see, having missed them on our first two trips to Ethiopia. Apparently, motorists feed them creating a dangerous situation as the baboons line the busy highway for a handout.

We reached Semera, the new and fast-growing capital of the Afar Region, in the late afternoon and checked into a posh but nearly empty resort.

Early the next morning, I was eager to leave the Afar Region and reach Animalia Lodge to resume our search for more wildlife. The drive was unpleasant to say the least. The truck traffic along the main route from Djibouti to Addis was unbelievable. We had to pass tandem trucks while avoiding trucks coming in the other direction. The buses were crazy, traveling at breakneck speed and passing haphazardly. We encountered many wrecks and I had my teeth clenched the whole way. I tried to capture the experience on a video but was only mildly successful.

Finally, we reached the turnoff for Animalia Lodge and I was able to breathe a sigh of relief. That afternoon, Yani, the lodge owner, and Mohamed his tracker took us out in an ancient Land Rover on a game drive.

We explored Yani’s concession spotting Beisa Oryx, Northern Gerenuk, African Golden Wolf, and Salt’s Dik-dik. The Gerenuk is a long-necked gazelle found in the Horn of Africa and drier parts of East Africa. This was only our third time encountering this near-threatened species.

Yani took us to a nearby hot spring near sunset. A large flock of Northern Carmine Bee-eaters was coming in to drink and possibly to roost.

That night I lay awake listening for lions. They often frequent the nearby marsh where they hide in the sugar cane but tonight they were silent. The following morning we were off to explore the Aledeghi Plains, part of the 1800-square kilometer Aledeghi Wildlife Reserve. Here large herds of Soemmerring’s Gazelle grazed on the vast grasslands. This vulnerable species is restricted to isolated parts of the Horn of Africa. They were quite wary and it was difficult to get close for good photos.

The species I was hoping to see was the endangered Grevy’s Zebra. We had not seen these rare equines since our first trip to Africa in 1990! We searched in vain until spotting a small family group near the woodlands. They, too, were wary and it was impossible to approach closely, so we had to settle for distant views and photos. It was still great to see them again after 30 years!

Beisa Oryx, African Golden Wolf, Common Warthog, and Abyssinian Hare rounded out our mammal list before we returned to the lodge for a midday break.

An afternoon game drive in a different part of the reserve yielded more of the same species of mammals. We stayed out after sunset to look for nocturnal mammals. I hoped that we might find the lions that hang out in a nearby sugar cane plantation. We stopped to chat with some locals who said a lion had been spotted not far away a few nights ago. We weren’t so lucky, depending on how you look at it. We wished to see a cat rarely sighted in Ethiopia, but the locals and their livestock have to contend with them daily. We did spot African Civet, Spotted Hyena, and White-tailed Mongoose, so we didn’t come up empty-handed.

The next morning we left Animalia Lodge and drove to the nearby and much more popular Awash National Park. This was our third visit, the first back in 1995 and the second in 2011. I was hoping that things would have improved since 2011, but they continued to deteriorate. More and more locals encroach into the park to graze their livestock. The landscape is being denuded, leaving very little food for wildlife. This doesn’t seem to bother the number of tourists visiting the park. If you hadn’t experienced the park 25 years ago, you might not notice the amount of destruction going on. On the drive in, we did manage to see a few Soemmerring’s Gazelle, Salt’s Dik-Dik, and Beisa Oryx, but it was nearing midday and most animals would be resting.

We had lunch at the lodge where the Grivet Monkeys have become quite a pest. You have to watch them constantly or they will jump on your table and steal your bread!

The lodge is situated on the bank of the Awash River. The nearby Awash Falls tumble a 100-feet over the rocks into a pool with lurking Nile Crocodiles. It’s hard to believe we made a raft trip down the Awash in 1995 before the lodge had been built. I must admit it was more relaxing watching the crocs from an observation platform high above the river rather than clinging to a raft in the hopes we wouldn’t get tossed into the river! Such great memories!

We went out for a game drive in the late afternoon hoping to see more animals, but other than Salt’s Dik-dik, a few Beisa Oryx and Common Warthog, we saw very little. We stayed out after the sunset hoping that once the locals left with their livestock, the nocturnal animals would emerge. Abyssinian Hares were by far the most abundant and we spotted around a dozen Bat-eared Foxes. They were quite skittish, though, and it was difficult to get a good photo.

The following morning it was time to leave Awash National Park and return to Addis Ababa. Our third trip to Ethiopia was coming to an end. We want to extend a big thank you to our guides Mangay and Rufael for sharing their fascinating country with us. We are grateful to our driver Kasaye for his long hours on the road getting us safely from one destination to the next. Finally, I’d like to thank friend and guide Yigo for coming up with this itinerary and to Yared of Dreamland Ethiopia for making it happen. Stay tuned for our next destination, a visit to Zakouma National Park in Chad.

For the 137 bird species seen and photographed by Marc during our last two trips to Ethiopia go to his list on iNaturalist: 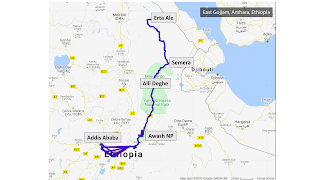