It had been a long 25 years when we last visited Simien Mountains National Park in northern Ethiopia. A lot has changed in the intervening years, most notably the completion of a road through the park. This road has made the Simien Mountains much more accessible to locals and tourists alike. Back in 1995, construction of the road was just starting and very few people ventured into this remote domain of baboons with bleeding hearts, wolves that were once thought to be foxes and bizarre-looking plants. We saw all these wonderful things back then but our focus was more on trekking rather than wildlife viewing. It was the opportunity to view and photograph the endemic creatures of Simien Mountains National Park that drew us back.

We met our driver, Kasaye, in Gondar and our local guide, Mangay, in Debarek before proceeding to the park. This time we spent 2 nights at the comfortable Simien Lodge, presumably the highest in Africa at nearly 11,000 feet. In 1995 there were no lodges and we had no choice but to camp. Today, our first quarry, the Gelada Baboon is easily seen within walking distance from the lodge. We encountered our first troop that afternoon where they were feeding in an open meadow. Their unique vocalizations not unlike human children came flooding back to me. In fact, Geladas are the only non-human primate to be able to change pitch while vocalizing.


Video of Geladas in Simien Mountains

We observed males, females, and infants feeding, playing, and grooming. Geladas are unique in another way, they are the only graminivorous primate, meaning that they exclusively eat grasses and their seeds. They use their strong hands for ripping grass and climbing cliffs to escape predators.

The next day we set off in our 4x4 in search of our next endemic target, the Walia Ibex. We saw them in 1995 but at a great distance. Not far from the lodge we spotted a canine in the road. Marc was able to get a good photo but I was stumped as to what it was. Mangay thought it was a jackal but it didn’t look like a Black-backed or Side-striped Jackal. That left only African Golden Wolf but it looked too small.

We resumed our search for the Walia Ibex. They tend to hang out at Chenek Camp but today they were nowhere to be found so we ventured deeper into the park. I was surprised to see so many people living in the park, growing crops, and grazing livestock. A lot of the native vegetation has been cleared but some groves of Giant Lobelia survive.

We continued toward Bwahit. Twenty-five years ago it took 5 days to trek here, now you can drive in a matter of hours to a pass at the base of the peak. Near the top, the guys spotted Walia Ibex! Marc, Mangay, our scout, and I followed four magnificent males on foot to within 300 feet before they disappeared over the ridge.

Mangay and our scout spotted two more and we followed on foot but not getting as close as before. We climbed back down to our vehicle and continued down the road spotting four more male Ibex, a particularly large fellow was lying next to a rock. That made ten male Walia Ibex, a far better showing than back in 1995!

Our next objective was to find an Ethiopian Wolf. Back in 1995, they were thought to be foxes and were refereed to as Simien Foxes. DNA studies have shown them to be more closely related to wolves, hence the new name Ethiopian Wolf. We saw one back in 1995 but it was a brief encounter and Marc wasn’t able to get a photo. We continued to the park boundary not finding a wolf so had to be content with the many Abyssinian Grass Rats we were seeing on the way back.

Near where we had seen the male ibex, Marc spotted a herd of thirteen female Walia Ibex including a calf.

We headed back to the lodge passing a group of 100 Gelada Baboons. The guys dropped us off and we decided to walk to see the baboons. We found the group and sat about 10m away to watch a male being groomed by his harem. The male got up and proceeded to mate with one of his females causing her youngster to screen in disapproval.

Back at the lodge, a bachelor group of nine Gelada Baboons was grazing by the parking lot. They made their way to the front of the lodge where one individual became extremely agitated, baring his large canines and standing on his hind legs. At first, I thought he was objecting to our presence but it was his reflection in the lodge window! He did his best to scare the imaginary rival troop away, too funny!

Still baffled by the canid we had seen in the morning, I sent the photo to friend and author of “Canids of the World”, Dr. José R. Castelló. He responded almost immediately. It was a subspecies of the Side-striped Jackal called the Kaffa Side-striped Jackal. In Uganda and Ethiopia, they lack the distinctive white-tipped tail and white side stripe so that’s why I was stumped. According to Jose’s book, they are a rarely recorded subspecies in Ethiopia and have not been detected in Simien Mountains National Park. Could we have the first documented sighting?

We set off at 8:00 the next morning for the long drive to Kafta Sheraro National Park, a new destination for us. We were joined by our camp staff in a second vehicle in Gondar and continued our way north. We began to get stopped at more and more police checkpoints. Mangay said it was because we had entered a new region, Tigray. Finally around 4:00 we arrived in the town of Humera where we found a sign pointing to Kafta Sheraro National Park.

It led us to a small house in an otherwise empty field where a few guys were hanging out. Apparently, today was a holiday in Tigray and there were no rangers to escort us into the park. Bummer, had we come all this way for nothing! The guys seemed to be arguing or maybe discussing our predicament. Finally, we were told that the ranger was at today’s celebration and when it was over in about an hour, he would escort us into the park. I had my doubts given the late hour. We went to a hotel in town to have a very late lunch or early dinner. Today’s ceremony was being broadcasted on a big TV screen. We tried to figure out what the heck was going on. It appeared to be the 45th anniversary of when Tigray Province had defeated the central Ethiopian government. So was this a celebration or a rally calling for Tigray to join the neighboring country of Eritrea?

We finished our meal and returned to the park headquarters where a new vehicle was parked. More discussions ensued and we were informed that we would be escorted by a woman in a sparkly jumpsuit to the park. We were also joined by a scout who for some reason did not know the way to camp. At long last, we were on our way! As we entered the park, it was very dry and barren. I was hoping to see animals but we saw none. We arrived at camp around 6:30, just after the sun had set. Two wood fires were blazing and there were houses with women and children. It wasn’t at all what I was expecting but at least we were inside Kafta Sheraro National Park.

Setting off around 6:30 the next morning to do our first safari, I was amazed at how dry it was and how many areas had been recently burned. We drove for awhile not seeing one mammal until I spotted a lone gazelle. I couldn’t quite place it and when we checked the field guide later, we settled on Oribi.

A little further on a second gazelle was spotted and identified as a Red-fronted Gazelle. Further investigation revealed that it was actually an Eritrean Gazelle, a new species for us! Also known as Heuglin’s Gazelle, this endangered gazelle has a very tiny range mainly in the area where Sudan, Eritrea, and Ethiopia converge so we were very lucky to see it.

We drove to Endameki Tourist Camp under shady trees along the bank of the Tekezé River. On the other side was the tiny country of Eritrea. We had the whole campsite to ourselves. Now, this is what I had in mind!

The park is home to the northernmost elephant population in Eastern Africa and it was the hope of seeing this herd that drew us to Kafta Sheraro. There was old elephant dung around camp but we were told that the elephants had crossed the river into Eritrea. We set off with our scout to explore the area around camp. We startled a warthog but the big stars of the show were the birds along the river. Marc spotted an Egyptian Plover on the near shore. We were hoping to see them in Ghana later in our trip but were not expecting them here. Sought after by serious birders, the Crocodile Bird, as it is also known is the only species in the genus Pluvianus. According to Greek mythology, the trochilus goes into the open mouth of a crocodile to feed on leeches. The reptile wanting to be rid of the pesky blood-suckers does not harm the bird. Could the Egyptian Plover be the mythical trochilus or crocodile bird?

We later learned that Kafta Sheraro is an important wintering site for these birds. The cranes share the river with local Eritreans who fetch water with donkey-drawn carts.

An afternoon game drive produced a Black-Backed Jackal pair, Olive Baboons, more kudu, and a female Oribi but not much else. After dinner, we went for a walk with our scout hoping to see nocturnal mammals but only managed to scare up what were most likely Cairo Spiny Mice. Sadly we had only one night in this idyllic spot and the following morning left for the city of Axum.  On to our next destination, the Danakil Depression, one of the most inhospitable places on Earth! 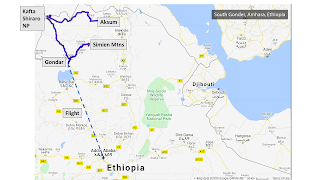