The last stop on our Ecuadorian adventure was Cayambe-Coca National Park, a short 45-minute drive east from Quito. The draw here is Andean Bears and Mountain Tapir. We had made arrangements to meet Armando Castellanos, the president of the Andean Bear Foundation. He has been studying bears and tapir in the Park since 1995 and has been working with the locals to mitigate human-bear conflicts. Our base would be Guango Lodge, about a 30-minute drive from Cayambe-Coca Ecological Reserve. We arrived a day earlier than Armando which gave us the opportunity to see birds around the lodge. The highlights here are the many hummingbirds that frequent the feeders, colorful tanagers and the pair of Torrent Ducks that live in the nearby Papallacta River.


The following day Armando picked us up after lunch and we drove to Cayambe-Coca National Park to scout for Andean Bears. The vegetation here is very different than that of Maquipucuna Reserve. The main habitat is the grasslands of the páramo, an alpine tundra ecosystem. Here the bears feed mainly on Puya bromeliads and unfortunately have developed a taste for beef. There is one village inside the park, Oyacachi, and the locals graze their cows on the páramo. They are easy pickings for the bears, especially the calves, and part of Armando’s work is to compensate the locals when a bear kills their livestock.

The bromeliads form a more interesting part of the story. The bears have adapted to eating these plants in several ways. The first is to consume the entire plant, an example of which Armando showed us.

The second is to eat only the top of the plant leaving the base prone to infestation by beetle larvae which the bears later harvest. It’s an interesting adaptation allowing the bears to survive in an environment where there’s not a whole lot to eat.

We drove on dirt roads inside the park but did not see any bears. It was getting late and Armando said that they would be making their nests for the night as they are strictly diurnal. Suddenly movement on the right side of the vehicle caught my attention. It was a bear not far from the road! We stopped to get a better view and saw that it was a sow with two young cubs! She raised up on her hind legs to get a better look at us, then ambled off with her two cubs in tow. Marc was able to get some photos but it was getting dark and the bears were quite far. Armando was ecstatic that we had seen our first bears.

Armando picked us up at 7:00 the following morning and we drove to Termas Papallacta, a resort spa with a private entrance into Cayambe-Coca National Park. Not far from the gate we saw two Brazilian Rabbits or Tapeti next to the road but they scurried off before Marc could get a photo. We climbed higher and entered the park. The weather wasn’t great with clouds obscuring the views but at least it wasn’t raining. We continued on dirt roads stopping occasionally to scan for bears but saw none.

Armando stopped and honked at a man walking along the road with a backpack. He was Melchor Ascanta from the nearby village of Oyacachi and would be our tracker for the remainder of the trip. Armando explained that Melchor used to be a puma hunter and had killed around 60 of these cats but that he now works for Armando tracking and helping to radio-collar Mountain Tapirs. I’m glad that he has had a change of careers. As we were driving to the known home range of a radio-collared tapir, two White-tailed Deer crossed the road. Some sources list this deer as Odocoileus virginianus, the same species we have here in the United States. Other sources classify these deer as the Andean White-tailed Deer (Odocoileus ustus), their own species.

We dropped Melchor off so he could go in search of the Mountain Tapir the old fashioned way, looking for tracks as we didn’t have the radio receiver and antenna with us today. Melchor called on the walkie-talkie that he had located one and we drove to intercept him on the road. I wanted to go find the tapir but Armando said we needed rubber boots to hike off-road and the weather had taken a turn for the worse so we’d have to wait until tomorrow.

Armando and Melchor picked us up at 8:00 the next morning and we returned to the park. An Andean Fox was on the road ahead but to my dismay, he disappeared as we approached. We waited and he returned seemingly looking for a handout. This fox is apparently used to being fed by the rangers at the nearby entrance station. Melchor threw him some bread and he hung out for awhile allowing Marc to get some great photos.

We returned to the location where Melchor had found the Mountain Tapir yesterday and prepared to track her. This time we had the radio receiver and antenna to pick up her signal. With this high tech equipment we should have no problems locating her or so I thought. It had started to rain so we put on Gortex pants, jackets, rubber boots and rain ponchos to keep us and our photo equipment dry.


We followed Melchor (or at least tried to) up to the low point on the first ridge. It was tough going on uneven terrain through knee-deep tussock grass and wet marshy areas at an elevation of 13,500-feet! We had to be very careful not to twist an ankle.


Melchor would go ahead to pick up her signal with the receiver and we’d follow when given the ok. At one point we were within 50 meters of her but couldn’t see her in the thick fog. This was frustrating. The story was always the same, “nada tapir” (no tapir in Spanish).

We stopped for a break and after lunch, we had lost her signal so Melchor went in one direction to look for fresh tracks and we went in the other direction with the receiver and antenna but it stopped working due to all the rain. Armando radioed Melchor to see what was going on and he had found her sleeping. Perfect! We started off to his location but he radioed back that she had woken up and moved off! This was beyond frustrating, it was downright infuriating! We walked to a nearby ridge and sat while Melchor went below to look for the tapir. She may have headed to a patch of forest nearby to hide. Suddenly we heard a snort and Armando said in an excited whisper, “Tapir!”. At first, I couldn’t see her then spotted her on the next ridge. She was heading down to the river and Melchor’s location. Following her was a young calf with a white-striped coat! It was amazing to see an adult Mountain Tapir but to see a female with a baby was exceptional. Finally, after trudging through the páramo for 5 hours in the pouring rain we had seen not one but two Mountain Tapirs!

Back at the car, Armando told us that this tapir is named Pache or Panchita as he affectionately calls her. He has been following her for 7 years and estimates that she is more than 10 years old. This is the third time she has given birth during the timeframe he has been studying her. He thought the calf was 6-7 months old. Radio collaring a Mountain Tapir is no easy task. It takes tracking with dogs to chase the tapir to a lake where it can be darted. Once anesthetized, a tracking collar can be fitted before the animal is woken up. Obviously, it is very stressful for the tapirs and something Armando does not do often. Currently, he has 12 Mountain Tapirs radio-collared for his study.

As we were leaving the park, the weather started to clear and we finally got a glimpse of snowclad Antisana Volcano at nearly 19,000-feet!

It was raining when we got up the following morning and it didn’t look as if the weather was going to improve. We returned to the park with Armando and Melchor one last time in the hopes of seeing Pache and her calf again but they eluded us. It’s probably for the best as we had disturbed them enough.


We decided to drive around and look for bears instead but the visibility was poor. The only mammals we saw were two more White-tailed deer. We returned to Guango Lodge where we said our final goodbyes to Armando and Melchor. We told them the effort it took to locate Pache and her calf made finding her all the more special. We thanked them for all their hard work in studying and protecting the Andean Bears and Mountain Tapir and wished them continued success in the future. To find out how you can help and visit the bears go to:

Back at the lodge, the manager built a fire in the stove so we could dry our wet clothes once again. Marc was determined to get a photo of a Sword-billed Hummingbird that visited the feeders at dusk and his patience paid off. With a bill longer than its body, it cannot perch on the feeder and must hover.

Our 5-week visit to Ecuador had come to an end. We had an amazing time exploring the Amazon Basin, the cloud forests on the western slopes of the Andes and the páramo along the continental divide. We were fortunate to see around 300 species of birds and nearly 50 species of mammals in this biodiverse country. We look forward to our next visit. There’s still so much to explore!
We hope all is well with everyone.
Peggy and Marc 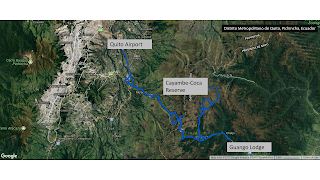