After a delightful visit to the village of Phu, we retraced our route back down the Phu Valley to where the trail diverged to cross the River and entered the Naar Valley.

The wind had picked up making the descent tricky but we reached the suspension bridge and climbed steeply to the Gyalbu Kumbu Monastery where we’d camp for the night.

There didn’t seem to be anyone around but Kumar found a woman who directed him to a small building that he could use as a kitchen. The guys set up the tents while we visited the gompa to watch a puja ceremony. Three to four young monks were chanting, beating a drum and clashing cymbals. It was nice to find an active monastery. Many are now vacant with the monks only returning on special occasions.

As night fell, the gompa was lit up with red lights. It looked like a space ship. The nearly full moon bathed the surrounding mountains in a soft glow.

A short trek day today but we would finally reach the village of Naar. We climbed steadily above the gompa with views of Himlung looming over the Phu Valley and Kangaru in the clear above the village of Meta.

The climb continued until we reached an impressive line of ancient chortens and with Kangaru beyond it made for some spectacular photos.


Around the next bend, the village of Naar came into view. It was an impressive sight with ancient stone houses, red-roofed gompas and blue-roofed guesthouses situated at the end of the valley with snow-capped mountains looming beyond. Terraced barley fields now barren surrounded the village.


There was a lot going on in Naar and we set off to investigate. Nearby groups of villagers were busy threshing barley. The men were using wooden paddles to beat the harvested grain to separate the seeds from the stalks. We took photos and videos of the action.

Unlike Phu, there were more people here going about village life. In addition to the threshing, people were busy washing dishes and clothes, taking care of kids, plowing fields, etc. making for some great photos.


In the wee hours of the following morning, we were rudely awakened by a chopping sound. At first, I thought the guy that runs the guesthouse had run out of firewood. Marc got up to investigate and said three village men were already up and beating barley! More threshers joined in and it was impossible to get back to sleep but somehow we managed to get at least another hour in.

As we left Naar, I felt privileged to see a way of life that is fast disappearing from the planet. It was good to see the villagers working together seemingly enjoying a simple but difficult way of life.

We climbed down and down on a series of switchbacks toward the Labse Khola. We didn’t reach the river at this point but followed a trail above it until we reached a newly built suspension bridge and crossed to the other side. It was then up and up to a plateau where our tents were being set up among the stone huts and corrals of a summer grazing camp.

Chet, our guide, spotted a pika in the stone wall of one of the huts and with a bit of patience, Marc got some great photos. It’s difficult to identify pikas but this one was most likely a Large-eared Pika.

As we entered further into this remote valley, it became drier and drier. We scanned the barren hillsides for Blue Sheep and often spotted them grazing across the river, high above us. For days they were the only other inhabitants in this lost valley which we would follow to the Teri La.

On day 12 of our trek, we set off for the Teri La High Camp. We climbed high above the river and Dorje spotted a few herds of blue sheep on the ridges across the river. We stayed high only dipping down to cross a side stream. We finally reached the river crossing without a bridge. Kumar was there with the kitchen boys building a bridge of stones so we didn’t have to use our sandals to wade across the frigid water. On the other side, we climbed a steep moraine. Chet had to hold my hand in spots because I didn’t feel comfortable crossing the steep, exposed sections. Finally, we reached a high barren plateau and the going got easier. We could now see the Chulu Range, climbing peaks topping out at over 21,000-feet.


We were now over 16,000 feet and moving slow. Chet said we had plenty of time so there was no point in pushing it. We finally reached the river the color of Tang and headed up it. We crossed the “Tang River” several times but we could hop across on rocks.


We climbed gradually approaching 17,000 feet. We could see a plateau ahead and Chet said the camp was on top. Finally, around 1:30 our tents came into view. There was little wind and the sun was shining so it was pleasantly warm. However, when we left our tent for dinner, I saw a few snow flurries, not a good sign. Before going to bed I noted that there were quite a few stars out so I felt more hopeful for good weather tomorrow.


At 2:00 am I woke to the sound of a pitter-pattering on our tent. When I peered outside the ground was covered in snow! I know I shouldn’t be superstitious but being the 13th day of our trek, I was concerned that something like this would happen to prevent us from crossing the high pass. I woke Marc and he checked the weather again on his InReach but it said there was only a 10% chance of snow showers. He said it was clear when he went out at 10:00. He fell back asleep but I couldn’t. I felt too anxious about whether or not we could cross the pass in this weather. I kept willing the snow to stop but it didn’t. We finally got up at 5:45 and I braved the 4 inches or so of snow to get to the toilet tent. When I returned to our tent Chet and Dorje were there. They told Marc that we’d cross the pass today before the weather got any worse. I was anxious and eager to get going. I just wanted to be up and over the Teri La.


We packed up than had breakfast. We put on our Gore-Tex pants and jackets as it was still snowing lightly. We left around 7:10 with Chet. Three of the porters were already ahead and It was difficult for them to follow the snow-covered trail so Chet with barely a voice had to shout directions to them. The going was slow but the grade wasn’t too steep so the snow wasn’t causing too much of a problem.


As we neared the pass, we stopped to put on our microspikes. I felt much more confident with them. The porters had already flown over the pass by the time we arrived. I must admit what was supposed to be a high point (literally and figuratively) of the trek was anticlimactic. Of course, the weather had everything to do with it. With no views and blowing wind, we didn’t linger too long. We snapped a few photos of us at 18,356-feet and headed down.


Thank goodness for our microspikes, the descent would have been much more difficult without them. We descended a moraine to a river crossing and the high camp for trekkers coming in the opposite direction.


We removed our crampons since there wasn’t any more snow but we had a steep climb ahead. I wasn’t feeling at all confident today and Dorje had to lead me up the steep pitch by the hand. Near the top, it got even dicier as there were some rocks to negotiate. Once on the top, I thought it would get easier but it didn’t. Now we had to contour around some steep slopes on a trail only a foot wide! Dorje had to come to my rescue again and lead me across by the hand. I was nervous about Marc behind me but he seemed ok with the exposure where one slip could mean a fall of 500-1000 feet in spots! The contours seemed to go on forever. I couldn’t believe that fully loaded mules could negotiate this narrow, exposed trail! We finally reached the end of the cursed contours and could see camp set up below. Now, all we had to do was climb 2500 feet straight down on a trail with loose scree!


At the bottom, we had to cross a river before walking down the valley to camp. The kitchen crew and porters had pretty much set up camp for us. After carrying heavy loads over an 18,000-foot, snow-covered pass they still had enough energy to set up all the tents. What a great crew!


Hot juice and noodle soup were served. We shared one packed lunch and gave the other to the porters thanking them for all their hard work. We returned to our tent to rest after a very mentally and physically challenging day. I was very happy to be over the Teri La!


We hope all is well with everyone,
Peggy and Marc 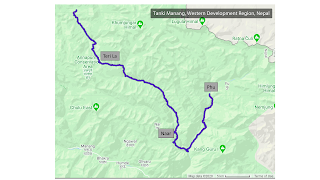