Our journeys have brought us back to Mongolia in search of the elusive Snow Leopard. We ventured here back in 2005 but then our focus was trekking and cultural. During this trip, we would travel to the Jargalant Mountains in the western part of the country near Khovd where a healthy population of Snow Leopards is known to reside. We added a few days to the beginning of our itinerary in order to rest up and get over jet lag but I couldn’t resist an opportunity to look for Pallas’s Cat, a smaller feline found on the Eastern Mongolian Steppe. We were able to book a private 3-day tour from Ulaanbaatar, the capital of Mongolia. After arriving late the night before we were picked up early the next morning by our guide Jargal for the 10-hour drive east. Once off the main road we drove along a rutted dirt track startling a Corsac Fox. Marc was able to catch him in full flight through the windshield.

Near the small settlement of Kahlzan, Mongolian biologist Otgonbayar Baatargal (Oogi for short) had set up a tiny research camp to study Pallas’s Cats. We told Oogi we were from Vermont never expecting him to know where it was. To our amazement, he said he had collaborated with a professor, Dr. James Murdoch (Jed) from the University of Vermont! Jed is the director of the Wildlife & Fisheries Biology Program and his current research examines the ecological relationships between steppe carnivores in Mongolia, including Corsac Foxes, Red Foxes, badgers, and Pallas's cats, and the effectiveness of management strategies at protecting them. What a small world! We arrived late in the afternoon and settled in our ger, the Mongolian version of a yurt.

We didn’t have much time to search for these small charismatic cats so instead Oogi suggested we go and take a look at a radio-collared one. When we arrived at the site we were surprised to find that one of Oogi’s assistants had a Pallas’s Cat in a white cotton bag. Like a large butterfly net, the bag was used to capture the cat in order to remove her radio collar. Carefully we peered inside. A beautiful cat with intense yellow-green eyes stared back. She seemed more annoyed than frightened most likely having been through this drill before.

The Pallas’s Cat (Otocolobus maul) is the only member of its genus and is named after German naturalist Peter Simon Pallas who first described it in 1776! The genus Otocolobus comes from the Greek language and means “ugly-eared”. This cat was by no means ugly. Maybe unusual in that its eyes are in line with it ears, allowing the cat to peer over rocks exposing a tiny portion of its head while making it more difficult for prey to detect or predators to find. We admired her at close range, taking some photos before she was released. She paused momentarily before taking off to hide in the tall grass.

This area of Mongolia has an unusually high density of Pallas’s Cats. The habit here consisted of open grasslands interspersed with rocky outcrops where the cats prefer to hide. Tomorrow we’d search for a Pallas’s Cat in a more natural setting. We returned to camp for dinner and some much-needed sleep.

Early the next morning we drove to Khalzan Village where we stopped to do some birding in a dry riverbed. There were some good birds here but a Eurasian Eagle-Owl stole the show.

We drove past the village to an area with many rocky outcrops to start our search for a Pallas’s Cat. Along the way, we encountered a family of Demoiselle Cranes. Soon they would start their migration to the Indian Subcontinent where they will spend the winter.

We parked and walked from rocky outcrop to rocky outcrop peering in tiny holes and crevices to no avail. Oogi’s assistants showed up on a motorbike and like us, they had no luck finding a cat. I found it amusing that the local assistants who use motorbikes to herd horses and sheep were using them to find Pallas’s Cats, “Like Herding Cats”, I thought.

We decided to return to camp for lunch and on the drive back I spotted some Mongolian Gazelles running across a distant ridge. We stopped the vehicle and set off on foot to see if we could get closer to them but they were very wary and continued to run. Population estimates for this species range from 400,000 to 2,700,000 but they are hunted both legally and illegally hence their fear of humans. Although seemingly abundant now, populations can crash due to disease outbreaks and harsh winters.

Back at camp we finished lunch and entertained ourselves by photographing the resident Brandt’s Voles, a major food source for the Pallas’s Cats. They’d pop up out of their burrows but disappear quickly if we approached too closely or moved too quickly.

Just then we got the call from Oogi that his research assistants had located a Pallas’s Cat! We raced off to the location to the north of Khalzan to find a Pallas’s Cat hiding in the grass at the base of some rocks. We could approach slowly to within 6 feet to get a close but obscured view. Pallas’s Cats defense strategy seems to be to hide.


We backed off hoping the cat would move but he remained hidden. We convinced Jargal to let us remain with the cat until it moved while the others returned to camp. We had some camp chairs in our vehicle and set them up for the wait. It was so peaceful to be alone on the Mongolian Steppe with a Pallas’s Cat just 30 feet away. As we waited, a few Brandt’s Voles popped up from their burrows. A Mongolian couple on a motorbike stopped by curious as to what these foreigners were doing. We waved and said hi and they went on their way shaking their heads. After 3 long hours, we got up to check on the cat. He was still there! His patience was outlasting ours. We got a little too close and he jumped up and sprinted off across the Steppe. We were unprepared for his hasty departure but Marc was able to get a photo.

Early the next morning we went off in search of more Pallas’s Cats before starting the long drive back to Ulaanbaatar. Even with the help of Oogi’s assistants, we weren’t able to find another cat. Reluctantly we continued our journey west toward the capital city. Once back on the main road, Marc was able to photograph a Steppe Eagle flying away from the highway.

As we neared the city, traffic ground to a standstill. My how things have changed in 13 years! Ulaanbaatar was growing at a brisk pace. High-rise apartment buildings, motorways, and fancy hotels were being constructed all around us. It was a sharp contrast to the open steppe with miles and miles of grasslands and rolling hills. After battling the traffic we finally arrived at our hotel where we would meet our group for the Snow Leopard Tour. Let’s hope our luck with the Snow Leopards will be as good as it was with the Pallas’s Cats!
We hope all is well with everyone.
Peggy and Marc 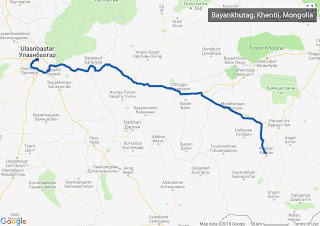 Marc & Peggy: I have news for you! Doreen is in the Humla Valley of Nepal working for the Humla Fund on a medical service trip [https://bit.ly/2IxEzlD]. After two weeks in Nepal, Doreen will spend two weeks vacationing in Vietnam. 🇻🇳 She is and will be throughout with her friend Jan (who volunteered for the Humla Fund three years ago). Also of note, we are in contract to sell our apartment. Might close as soon as 10/10. After closing, we will move to Suffolk County, Long Island, to be closer to her parents, four brothers, and their families. Doreen retired in August. God willing, I might not be too far behind. Safe travels. Always, Ken